Great to be here with you today! Although we usually go through the latest released music, today we’ll be making a change and focusing on the latest and greatest music video releases. While many Jewish music fans enjoy listening to the newest albums and singles, an interesting music video adds a new dimension for the listener. Let’s get started!

2. Eli Levin – Hallelu – This next video will stand out among the typical music videos as you enjoy the performance by singer Eli Levin and wonder how they managed to get the piano on top of              the mountain. This video features Tzvi and Matt Levin of the famous Pumpidisa band as well adding in their own flavor to the music. 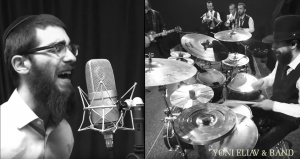 3. Yoni Eliav & Band – Funky Medley 2018 – What do you get when you mix an amazing band with amazing singers and the energy that you can only get from a live performance? In this case,               it’s the Funk Medley 2018 from Yoni Eliav and his band, featuring vocalists Eli Marcus, Levy Falkowitz, Yoni Z, and Mordechai Shapiro. This medley covers some of the most recent hits such           as Benny Friedmans “Ivri Anochi,” MBD’s “Boee,” and more!

4. Simche Friedman – Neshama – Most of you have heard (and danced to) the song “Bekarov Mamash” from Simche Friedman. This time around, Simche brings us a beautiful song called                   “Neshama,” which describes the journey of a soul throughout life. This track is just one of many that will be on Simche’s debut album. 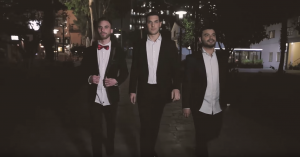 5. Omen – Lchaim – Next up we have an exciting new song from the singing group Omen. Based out of Israel, Omen consists of Netanel Israel, Itzik Baruch, and Kobi Baruch. The song was                   produced by the super talented, Sruli Broncher.

6. Ruvi New and Bentzi Marcus – 6 Days – Hot off the release of the Storm the World album comes a brand new video from Rabbi Ruvi New. This track was composed by Ari Goldwag and                  features lyrics from Miriam Israeli. In case there aren’t enough stars already involved in this production, the track also features Bentzi Marcus whose vocals do a wonderful job blending with            Ruvi’s.

7. Yoni Z – Ma Naaseh – After his last two released of “Da Ma” and “Odeh” Yoni Z is back with a new song and music video. This track was composed by Yitzy Waldner and was produced by               Yanky Katina with amazing arrangements by Ian Freitor and Daniel Kapler. The song pairs perfectly with the intense music video and Yoni’s vocals are out of this world!

Hillel Kapnick is a Producer/Singer/Musician/DJ based in Monsey, NY. He owns and operates Uptop Recording Studios (Monsey, NY), and sings and plays at simchos with his orchestra and one man band regularly. Hillel can be reached for questions, comments, or bookings at hillel@hillelkaps.com  or through his website @ www.HillelKAPS.com