Touro College and University System recently orchestrated a program to help educate the Jewish community on the very real dangers of drug addiction and how our community can help their members recover.  Dr. Alan Kadish, president of Touro College and University System said, “It is time to recognize that addiction affects every community, and that we all can play a role in breaking its hold on our friends and families.” Dr. Richard Riemer, senior associate dean of Touro University California College of Osteopathic Medicine told the audience that pharmaceutical companies have encouraged doctors to over rely on opioids to manage pain. This has resulted in opioids being over-prescribed and currently one in ten Americans is currently using opioids. David Mandel, CEO of OHEL Children’s Home and Family Services said  that members of our community should not stigmatize those suffering from opioid addiction, for someone you know or love can be that addict tomorrow.

Yeshivas Ruach Chaim celebrated almost a quarter of a century of talmud Torah and chinuch habonim on April 29th at the Young Israel of Avenue K with an Annual Dinner that honored Mr. and Mrs. Shmilu Neuman with the Keser Shem Tov award. Also honored were Mr. and Mrs. Moshe Weiser (Grandparents of the Year) and Mr. and Mrs. Nechemia Blatter (Parents of the Year.)

The Jewish Community Council of Marine Park (JCCMP) is sponsoring Brooklyn’s largest gathering of real estate professionals on Tuesday, May 8 at the Dyker Beach Golf Course. Participants will have the opportunity to attend seminars, speed mentoring, hear a keynote address by Jordan Slone (CEO, Harbor Group International), and enjoy a sumptuous fleishig buffet while networking with peers, leaders, and vendors.  They will be able to speak one-on-one with top talent in every facet of the real estate industry and gain precious insights on how to navigate next steps and maximize potential. For more details click ATTENDJCONN.COM or contact Yitzy Weinberg at the JCCMP at (718) 407-1832 or yitzy@jccmp.org

A highlight of Chol Hamoed Pesach in Brooklyn was the special event at the Amud Aish Memorial Museum. The event featured Stories of rescue, refuge and rebirth during the Holocaust with special focus on the tens of thousands of Orthodox Jews who lived in Shanghai, China during brutal Japanese occupation. Special emphasis was placed on the stories of the continuation of Jewish teachings and community, the good that one person can do for others, and the fact that these Jews remained committed to faith and seeing the yad Hashem despite life-threatening challenges.

Agudath Israel of America to Honor Mr. Shlomo Werdiger at “A Movement in Time” Convention

The Agudath Israel of America will honor Mr. Shlomo Werdiger, a prominent Flatbush askan and baal tzedokah, at the upcoming May 29 convention at the Hilton Hotel in Manhattan as guest of honor. The theme of the 96th annual Agudath Israel convention is “A Movement in Time.” In announcing their decision to honor Mr. Werdiger, the Agudath Israel declared that the honoree “is a stalwart of Orthodox Jewry and has been for more than three decades.” As chairman of the board of trustees of the Agudah he has been the driving force of many initiatives and accomplishments of the Agudah.

IDF Brigadier General Bentzi Gruber (Reserve) highlighted the April 16 Yom Hatzmaut (Israel Independence Day) and Israel’s 70th birthday at the Kingsway Jewish Center by delivering a riveting multi-media, behind-the-scenes look at the Israel Defense Forces that revealed the daily battle to ensure Israel’s security and uphold one of the most rigorous codes of ethics in the world today. The fascinating program was a project of the Morris Schnabel Adult Education Institute.

The 99th annual dinner of Yeshiva and Mesivta Torah Vodaath, one of the world premier yeshivas, will celebrate 25 years of harbotzas Torah at The Palace. The event will take place on May 6 and it will honor its renowned Rosh Hayeshiva, Rav Yosef Savitsky as well as the memories of Rabbi Aharon Braun, its former executive director, and Reb Yonah Blumenfrucht, a devoted ben Torah, a tireless askan, and caring friend to many. Also to be honored at the dinner with members of the class of 1968 are, Rabbi and Mrs. Shlomo Weinberger (Moreinu Horav Pam Marbitz U’Machzik Torah award), Mr. and Mrs. Isaac Akerman (community service award), Mr. and Mrs. Aaron Eichorn (Kesser Shem Tov award,) and Mr. and Mrs. Efraim Rosenberg (parents of the year award). 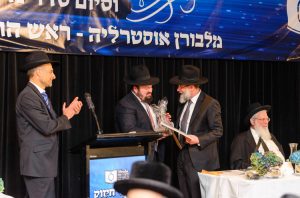 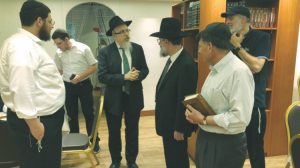 Partial view of the crowd at the Maamad Chizuk Limud HaTorah in Melbourne, Australia. 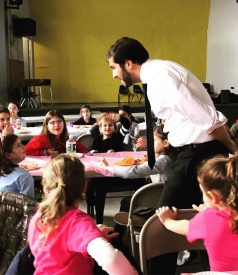 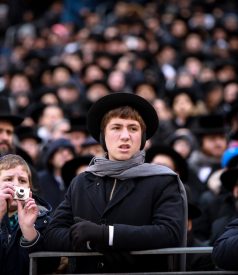