ART FROM THE HEART

Vibrant splashes of color dance across the canvas, bringing images to life and sparking heartfelt joy.

While I am certainly no connoisseur of art, I have to admit that there is something about Tikva Sadik’s bold depictions that calls my name.  Sitting at my desk to research this article and scrolling through the Art By Tikva website, I found it hard to believe that the artwork I was seeing could have been painted by someone who is all of 22 years old, and by all rights, probably never should have found her calling in front of an easel.  But as we all know, and as Tikva discovered during her journey to her calling, life can be full of surprises, some of which can actually be quite beautiful.

Currently a Silver Spring resident and the mother of an adorable baby boy, Tikva is Brooklyn born and bred.  While she did have an interest in art and an eye for detail as she grew up in Midwood, she never found a proper art teacher and contented herself with drawing on her own.  Tikva also channeled her creativity into writing and piano and distinguished herself through her elementary school and high school careers as a straight-A student.

It was until she was  a 12th grader at Masores Bais Yaakov that Tikva first got a taste of her calling, as she took a step back from her schoolwork and allowed her artistic side to emerge as she decorated bulletin boards for G.O. and became involved in other extracurricular projects.  Deciding to stretch her limits even further after her high school graduation, Tikva decided to stock up on art supplies, easels and canvases, and before she knew it, she had painted a picture of a snowy field on a starry night, feeling like Hashem was pointing her in an all new direction. 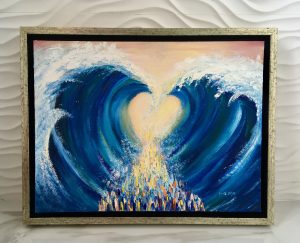 A Kaleidoscope of Color

Just a few weeks later, Tikva found herself in Jerusalem as a Bnos Sarah seminary student, her first trip to Israel a mesmerizing experience on many levels.

“I couldn’t get enough of Israel,” recalled Tikva. “It was so full of color, and walking around the street I somehow felt united with everyone.  I never anticipated how special it would be to be in Israel and something just clicked, turning on a side of me that I had never really acknowledged before.”

Like many other seminary girls, Tikva often found herself exploring Jerusalem in her spare time, venturing one day into a Meah Shearim art gallery. 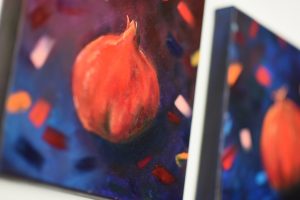 “I had been to art museums in the past and those didn’t stir anything special inside me, but this did,” said Tikva.  “The gallery owner, Avi, came over to me and said ‘I see you are either an artist or an aspiring artist.’”

With an opening like that, the conversation flowed freely and when Tikva shared that she had never really had a proper opportunity to learn about art, Avi pointed to a painting on display, informing her that they had been painted by Menucha Yanekelevitch, a Charedi artist who also gave local art classes.

“He handed me her number and I felt like Hashem had opened up a new door in my life,” said Tikva.  “It was so clear to me that when you initiate something and show Hashem you really want it, he reciprocates, and I really experienced that with art.”

Tikva’s art classes were anything but typical.  Seated in a room with Israeli girls who came for lessons after school, she was learning new skills with instructions given in Hebrew and often found herself saying “ma, ma?” as she tried to navigate her way through the language barrier.  But Tikva persevered and found that just sitting in the room and absorbing the culture was a tremendous growth experience, which also included Erev Shabbos divrei Torah from Yankelevitch, a fifth generation Yerushalmi.

“I loved the way she spoke,” noted Tikva.  “She helped me learn on my own and develop my own style. She is someone I am really thankful to have met.”

Returning home to America after concluding her seminary year, Tikva started college earning a degree in education while also teaching fifth grade at her alma mater.  Whenever a spare moment arose, Tikva would give her class mini art lessons and the girls presented her with a painting adorned with butterflies when school ended, thanking her for helping them spread their wings and teaching them to fly. 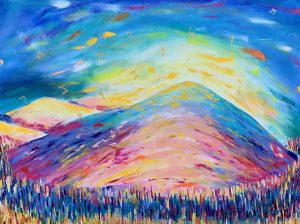 Tikva’s life continued moving ahead. She completed her bachelor’s degree and got married. As she pondered the next chapter of her life, choosing a career that maximized her strong academic skills seemed like the obvious choice.

Except that it wasn’t. It was clear to Tikva that her heart and her passion were pulling her in a different direction.

“I had a lot of skills and could use my brain to help others in many ways, but this was one life path that wasn’t about studying, and I wasn’t sure if I was going to be successful or not,” admitted Tikva.  “Yet deep down inside I felt like I always had a calling for art and I knew that I could inspire people and bring them closer to Hashem.”

Tikva credits her husband Elie as being the driving force that got her started on her artistic path.  With the new couple living in Israel for six months after their wedding, Tikva spent her days painting while her husband learned in kollel.  Her first piece was a sunset scene of a father and son walking outside of Jerusalem, and at Elie’s urging, she took it to Jerusalem Fine Art Prints to have it scanned onto canvas. It was the first of many prints she has sold from her fine art collection and is currently hanging in the home of one of her former neighbors.

“I was so uncertain about what I was doing and where I was going with this,” recalled Tikva. “I knew it was beautiful. I knew it was inspiring, and I wanted to share it with others, yet I was still very hesitant.”

As Tikva and Elie made their way first to New York and then eventually to Silver Spring, her collection continued to grow, as did her loyal following on Facebook and on her Instagram page.   She paints daily and loves the richness of oil paints, which allow for more blending than acrylics, although they do take a week to dry fully. Tikva believes that every painting has a life of its own, and noted that while some can be fully completed within three weeks, she has had others that have languished for weeks and even longer until inspiration struck.  On days when the creativity just doesn’t seem to flow, Tikva sits in front of her easel and just picks up a brush.

“It comes,” she observed.  “Always with a prayer. And always with Hashem’s help.”

Tikva’s fine art collection includes original oil paintings, custom artwork, prints, and semi-originals, which are hand- painted over a canvas print.  She has done semi-originals for clients who have admired a particular piece, but wanted a slightly different color palate to match their home décor, and she describes them as being as close to an original as possible, at a fraction of the price.  Her clients have run the gamut and include the Torah School of Greater Washington, which has a series of Art By Tikva originals hanging in its front entrance, and a young woman who was pondering conversion to Judaism when she and Tikva first met. The two have learned together and have forged a close relationship. More than one client has told Tikva “I love your work – it makes me feel closer to Hashem.”

Tikva gives art classes and often paints at night, when distractions are few and far between.  While she tries to work only for an hour or two and tries to remind herself to put down her brushes so that she can function in the morning, there have been times when she has lost track of time.

“Once before I was married, I was painting late at night and as I was winding down, my father was waking up to daven at neitz,” admitted Tikva adding with a smile, “Those are the best times.” 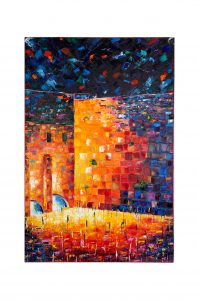 Tikva finds inspiration everywhere, although she has yet to paint a portrait of her almost one-year-old son, Yisrael.  Her playful nursery collection of four “Under the Sea” prints features a sea horse, a fish, an octopus holding a flower, and a mother turtle carrying a baby turtle on her back has been selling well.  Another nursery set was inspired by a trip to South Africa and features a quartet of safari animals, all of whom seem to be gazing into the distance with eyes that are solemn yet friendly.  Her latest project is a waterproof sukkah art printed on vinyl instead of canvas. Tikva anticipates offering reasonably priced prints of some of her most loved artwork in two different sizes at Judaica stores and on her website www.artbytikva.com.

Tikva currently has several different pieces in the works including a Kosel and a menorah. She has also been reading books about the Lubavitcher Rebbe as she paints his portrait to truly capture his essence. Tikva employed a similar approach when she did a 20-by-16 painting of Rav Ovadia Yosef titled “Maran,” a portrait that holds a special place in her heart.

“I felt very humbled as I painted and I prayed that it should be something that would portray who he was,” recounted Tikva. “Someone told me that it looks like Maran is learning in shamayim, and when I signed off that piece I actually cried.”

While there are many who hesitate to pick up a paintbrush because the results may be less than perfect, Tikva has found that both in life and in art, mistakes aren’t always what they seem.

“Once I started painting, I got in tune with the idea that we are all made up of mistakes,” said Tikva.  “Every painting is made up of layers and layers and no painting is ever perfect, and when I painted Rav Ovadia, the background was such a mess. I kept painting layers, and when I did the last one, the other layers and the things I had thought were mistakes ended up looking so beautiful.  We are all made of layers and we all make mistakes and have a history, but that’s what makes us beautiful and who we are.”

While Tikva finds starting off with a blank canvas to be the most intimidating part of her work, she contends that as with other areas of life, you just have to take that initial leap of faith, and the rest will follow.  She believes strongly that every piece of art carries a message that emanates from her heart, and not surprisingly, her favorite moments come when she looks at her easel and realizes that a painting is complete. 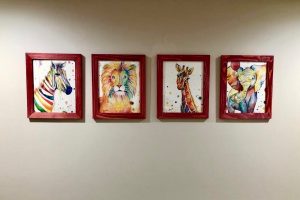 “There is no better feeling than signing off a beautiful painting that you know will inspire others to greatness and spark something within themselves,” said Tikva. “I love being able to speak to people through paint and canvas and to inspire their thoughts and emotions.  People really connect with my pieces because they are dvarim hayotzim min halev and are something that their hearts truly embrace.”

TO PROTECT AND SERVE- IN A YARMULKE 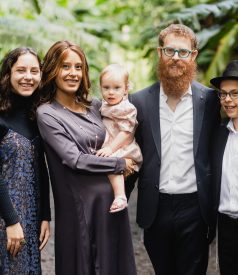 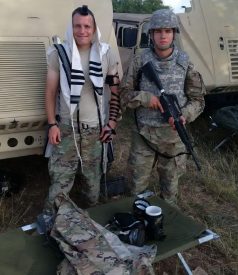 I GO WHERE I’M NEEDED