It seems the whole year since last Purim has been topsy-turvy, and any past Purim messages will be cliché at best. As I write this column weeks before Purim, nobody has any idea what this year’s Purim will bring. Will the doors of social distancing be blown open by then? Will people drop off packages and run? Will people be spraying their mishloach manos with Lysol before bringing them into the house? It’s a mystery.

But then again, isn’t that what Purim has always been about? The fact that we don’t really see the truth in black and white? Hashem has His plans and makes movements behind the scenes, and all we can do is go though the motions trying our best to guess which door to choose. The fact that Hashem’s name doesn’t appear in the megillah, but that we say the references to HaMelech refer to Him, reinforces the concept. There’s a plan somewhere here, but we don’t know what it is.

Imagine the conversation between Mordechai and Esther when he wants her to go to Achashverosh on behalf of the Jews. She tells him that it’s dangerous. Mordechai replies, “Who knows if this is why you became queen?” Let’s analyze this: Achashverosh kills his wife, who was his entrée into royalty in the first place. He then mounts a search for her replacement and puts all sorts of requirements in place. He ends up infatuated with Esther, who refused to reveal anything about her background, and she becomes the queen for whom he would do anything. And Mordechai says, “Maybe” this is why you were chosen?! Isn’t it clear beyond a shadow of a doubt that this is what was meant to be? Does he really have to say “Maybe”?

Yup. Exactamundo. The fact of the matter is that even the great Mordechai can’t guarantee he know what Hashem’s plan is. He just knows that there is one. So, what does Esther request? That the Jews daven and fast as a merit for her success. They gather and pray and fast, and Hashem saves them. They do teshuvah and we experience a new Kabbalas HaTorah  even greater than the one at Har Sinai. So, what did the trick? Do we even know?

You see, as much as we talk about Purim being a time of hidden meaning and secrets, the truth is that every day is like that. Isn’t one of the popular songs sung on this holiday, “A gantz yohr Purim, freilich zol men zein – The whole year is Purim, let us be happy!”? One thing I think we’ve learned most since last Purim is that nothing is sure, we don’t know as much as we think we know, and unexpected things will happen. But guess what?

Purim teaches us that we can be joyous in the face of uncertainty; that we can revel even as we’re unsure of what will be, or even what is at this very moment. And how can we do that? HaMelech. That word which appears over and over in the megillah is our saving grace. It is what reminds us that though the world seems to be out of control, it is not. It’s just not in OUR control.

The events of Purim showed us that despite our best efforts to control our destiny, it was only by realizing how utterly powerless we were that we actually succeeded in effecting a change in our destiny! It’s paradoxical, but isn’t that the theme of Purim? Paradoxes and ironies, inconsistencies and absurdities; they all show themselves in the Purim story which unfolds again and again all the time.

I don’t know about you, but I find that rather exhilarating! Imagine that someone could be out to get me and simply by relying on Hashem, I will foil his plans. Now, this is not to say that nobody will ever cause harm to a person or group. That may well happen, decrees may come forth, and suffering may ensue. However, it will all still be part of the King’s plan for His nation, perhaps merely intended to urge them towards the palace for a heart-to-heart.

So, this year, don’t make Purim a somber time. Look back to last Purim and recognize how much clearer you can see reality in light of the events we’ve just gone through. See how the façade of boisterous merrymaking has crumbled, leaving behind a clear picture of the mask that Hashem wears. And rest assured that when you look at Him that way, He will be smiling behind His mask. 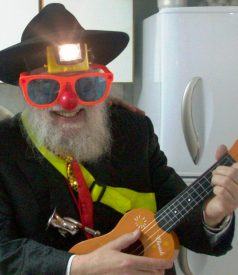 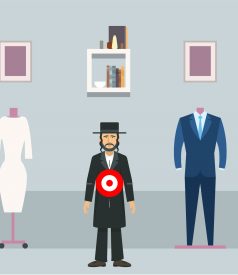 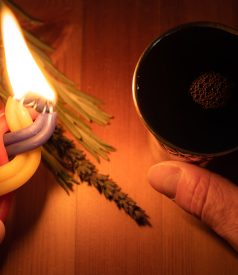