{For this article, you might find the following dictionary definitions helpful: rip current: “a narrow current flowing strongly from the shore to the sea, visible as a band of agitated water”; riptide: “a strong narrow tide that opposes other currents and produces turbulence, especially sea water that rushes seaward after incoming waves mount up on the shore”; and undertow: “the seaward pull of water away from a shore after a wave has broken.”} 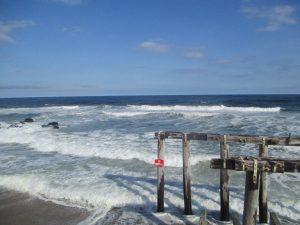 As we wind our way inexorably toward the winter solstice, I find myself beset by a not-so-unusual quandary.

You see, it’s all very well to do my research on trees, birds, animals and the like by just stepping outdoors on a pleasant spring or balmy summer day. But what I shall I write about now that a seasonal chill has set in, and the leaves, flowers, and birds of summer have become no more than a distant memory?

So what now shall I write about? Hey, I’ve got it — how about something that doesn’t appear to change very much with the cycle of seasons, at least to the external eye?

How about the Atlantic Ocean, the repository of some of my earliest memories?

Ah, the awesome grandeur of those ocean waves!

But wait just a minute! I still remember the admonitions of my grandparents and parents not to wander out too far into the ocean. After all, it was one thing to walk without shoes and socks on a day on which practically nobody else visited the beaches (owing to the coolness of the weather or the change of seasons), but quite another when it came to putting myself at the mercy of what we used to call the “undertow.”

Of course that was some seventy years or so ago. Today, we refer to the “undertow” as “rip currents” or “riptides.” Why, there are even signs posted on New Jersey beaches to be wary of their insidiously dangerous power—and that even strong swimmers cannot do battle with “rip currents”! Stories abound about those who waded into vigorous oncoming tides, only to be dragged away involuntarily to be drowned, Rachmana litzlan. 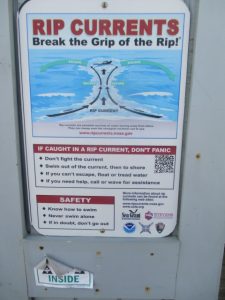 Need I tell you, dear readers, that a lot has changed in the last seventy years? (I don’t think so.) But one thing surely has stood the test of time: The concept of a rip current produced by the backwash of a surging wave is as potent a metaphor today as it has always been.

Could we not propose here that despite the beauty inherent in the to-and-fro movement of masses of seawater which we call “tides,” despite their almost hypnotic regularity and rhythmic swishing and crashing, despite their almost exotic allure to us business-weary landlubbers—despite all these attractive qualities, there exists an insidious force underlying the seaward migration of mighty waters, a force so incredibly powerful that it may even threaten the very lives of those who innocently immerse themselves in oceanic tides as they recede from the shoreline? The murderous currents occasioned by riptides—or the undertow, as we used to call it so many decades ago—constitute a nefarious force to be reckoned with, even by the hardiest “swimmers” among us. 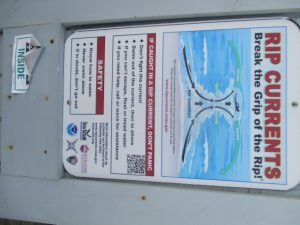 How true this is of despicable undercurrents of lashon hara and sinas chinam which are always ready to do us in while we unsuspectingly immerse ourselves in the tides of “current” events, be they political, social, or otherwise! Stories abound about those who waded into vigorous oncoming tides, only to be dragged away involuntarily to be drowned, Rachmana litzlan.

Wow! What a mussar lesson for us all—and just as the “dead” of winter approaches! Let’s make it a winter of swimming safely in the tides of Torah, avoiding the pitfalls of the rip currents of transitory and often misleading “current” events. Let us work together on obviating the “currents” of lashon hara and sinas chinam which all too often undermine the integrity of our lives. Indeed, let the ocean waves and the riptides which lurk beneath them teach us the true importance of leading a Torah-directed and Halachah-driven life while at the same time being wary of the rip currents whose undertow could easily overwhelm even the strongest of us.

After all, stories abound about those who waded into vigorous oncoming tides, only to be dragged away involuntarily to be drowned, Rachmana litzlan..

I may be reached at hillyarm@yeshivanet.com. Have a safe and edifying winter, dear readers! 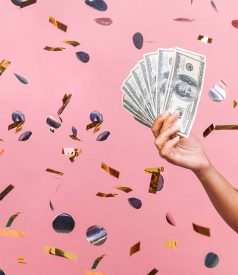 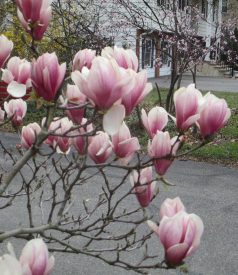 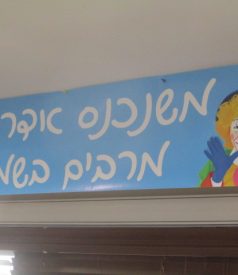