I don’t know about you and where you live—but I can confidently tell you that spring has finally arrived in the New York-New Jersey area: The crocuses are blooming on lawns in Brooklyn.

“Big deal! Big deal!” you say. “Who needs crocuses anyway—and while we’re at it, what do crocuses have to do with the recently departed Purim?”

True, I spotted these crocuses just before Purim. But there’s a lot more to the story than just that!

With every Megillah reading, I learn something of which I hadn’t been cognizant before.

You may remember that Achashveirosh had seven stewards (for want of a better word), one of whom was named Carcas (Megillas Esther 1:10). Various meforshim on Esther Rabbah have a field day with his name. For example, the Yefei Anaf tells us the Greek word to which his name is connected denotes loss and erasure (ibbud umechikah), particularly as part of the notrikon associated with the name of his fellow chamberlain Zeisar.  The Radal cites the Rashban as understanding the name as spelled with two letter kufs instead of with two kafs—thereby symbolizing circuses (batei kirkasayos)—which, needless to say, were exceedingly indecent in those days.

What a difference from the flower that bears a similar name, crocus! Whether blue-violet or golden yellow, its very presence and its concomitant lowly stature command your attention—and bring to mind higher, more palliative thoughts. You find yourself joyously exclaiming, “Ah, spring at last!”

Of course, “crocus” probably has no shayichus to anything Jewish. Undoubtedly, it’s an oriental word—perhaps a Sanskrit term which refers to some ancient, foolish myth or other, right?

Yes, it is true that the word “crocus” may be traced through its Middle English to its Latin to its Greek root. And then, guess what! We find that the Greeks took it from Lashon Hakodesh: “karkom,” saffron, to be precise.

Indeed, one species of the lowly garden crocus—Crocus sativus— had once been an important ingredient in food fit for kings.

In an important book on medieval cooking, Lorna J. Sass points out that “all of the coloring agents [in medieval cooking] were organic. The most popular was saffron, used to transform food to gold, the color traditionally associated with royalty.” Moreover, she relates to us that “although most saffron was imported, it was grown in some of the eastern counties of England, and the plant gave its name to the town of Saffron Walden in Essex. Since it takes the stigmas of seventy-five thousand crocus flowers to make one pound of saffron, the price always remained extremely high.” (I have come across another opinion that there would be approximately 210,000 stigmas to the pound.)

Royal food? Avvada: food fit for a sovereign even of 127 provinces—and probably brought to him, at least occasionally, by Carcas. Yes sir, I can almost hear Achashveirosh bellowing, “Carcas, please bring me some crocus—I mean, saffron!”

We are told in a number of places in the Gemara about karkom. Now it might be called “morika” (Shabbos 110b), “karkuma,” or kurkama rishka (garden crocus)—but you see that it was highly valued in the ancient world. And of course, it was a component of the Ketores.

Let us concentrate on the saffron species of crocus for a moment. Renowned for its rich golden-yellow hue, saffron was (as we have already learned) used as an important food coloring agent in the middle ages. But we don’t live in the palace of a medieval king. What can we as Yidden learn from saffron?

There is a bekannte Chayei Adam that deals with saffron, karkom, as a colorant. In “Klal 24 (Hatzoveia),” sa’if 5, the author cites the Shulchan Oreich that “ein tzeviah b’ochlin”—that there is no dyeing when it comes to foods (even in regard to putting saffron—karkom—into the food). But then he goes on to qualify this assertion by maintaining that “it may be said that since the [normal] way of using saffron is to color food, it is forbidden by everybody.” Kitzur Shulchan Oreich (siman 80, sa’if 43) brings this down as halacha. There are obvious ramifications of this declaration vis-à-vis the impermissibility of using food coloring for strictly decorative purposes. So we can learn—even from the insignificant crocus!

Yes, spring has indeed come to Marine Park—and Purim is over. But I have discovered a new link—tenuous as it may be—between the harbinger of the vernal season, the crocus, and the holiday we have just recently celebrated. Laugh if you will at the connection, but I am reminded that nothing in Hashem’s world is insignificant, seemingly occupying space or time without rhyme or reason.

Nothing—no, nothing at all!

I welcome any queries, comments, or suggestions. Please send these to hillyarm@yeshivanet.com. A spring-infused, kosher, happy (and COVID-19-free) Pesach to us all! 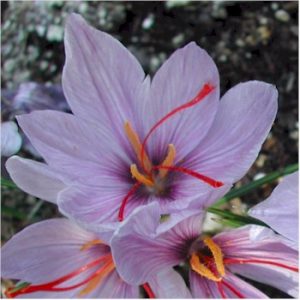 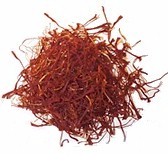 What you’re seeing here is a “small fortune” in saffron-crocus stigmas; a pound of these went for “well over $4,500” about forty years ago (bulk retail)!! 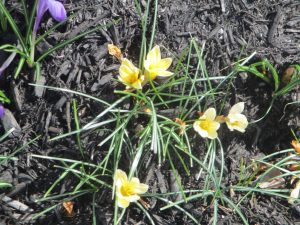 Ordinary garden crocuses. I took this photo near my home in Lakewood, NJ.