TWO FOR ONE DINNER

We’re all busy. Sometimes, even those of us who love to cook just don’t have it in us to think about dinner. That’s why I’m a big fan of stocking the freezer with dinner options that take the brainwork out of the process. But I’m also the kinda gal that needs variety and I get sick of the same-same frozen dinner every week. So, whenever I make dinner, I try to think about future-me. I prep double, switch up the format for half, and then freeze. I prep half for tonight, and half for the freezer. And voila, a few weeks later, when I have “one of those days” I have a very exciting, brand-new dinner waiting for me.

So, this series is the gift that keeps on giving. It’s a recipe you’ll prep once but get to enjoy it twice, in different formats! I chose to use ground turkey because it’s such a flavorful, lean, and delicious protein. Even though the flavor turkey imparts is particular, these two recipes are very different from each other, and it feels like an entirely new dinner! 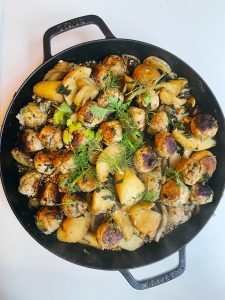 1/2 bunch cilantro, chopped (save the other half for the braise)

In a large, paella pan or sauté pan, sauté leeks and garlic in some olive oil until soft. While they’re sauteing, prepare your turkey mixture. In a medium mixing bowl, combine ground turkey, olive oil, cilantro, sage, garlic, onion, Aleppo, salt, and lemon pepper. Wait for your sauteed leeks to cool and mix those in as well.

Divide the turkey mixture in half. Shape half of the mixture into small meatballs, and the other half into burger patties. Freeze the burger patties (flat, in a zip-top bag, with excess air removed). 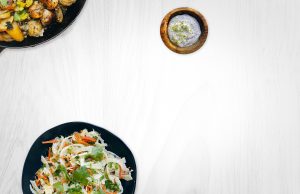 This is the one you’ll prep to serve right away. This dish cooks best in a large cast iron paella pan, a wide, flat high rimmed, pan (which, I highly recommend investing in for these kinds of one-pan dishes, because it can fit all of the protein, vegetables, and grains).

In a large, paella pan or sauté pan (the same one you used to sauté the leeks), brown the turkey meatballs on all sides. The trick here is to use medium-high heat, to avoid moving them around, and to be sure not to overcrowd the pan. Don’t worry about them being cooked all the way through; the goal here is to get some browning. While the meatballs are browning, prep the other veggies (see below). Set the meatballs aside.

Scrub celery roots well, then trim the top and bottom with a sharp knife. Peel skin with a vegetable peeler, then use knife to trim any recessed or hairy parts of the root. Cut the bulb in half, and then slice. Chop the green celery root tops as well if you have them (they add great flavor too!). Add them to the pan to sauté.

Add parsnips and fennel slices and sauté until starting to get soft. Deglaze the pan with white wine, then add the farro sage, cilantro, garlic, onion powder, and salt. Add the turkey meatballs back in on top of the farro, then add the chicken broth, ensuring that the farro is covered in broth. Cover the pan and simmer for 10 – 15 minutes, or until the turkey meatballs and farro are cooked through.

These come together so quickly, because all you have to do now is pop them on the grill (or grill pan) and make the slaw plus aioli. 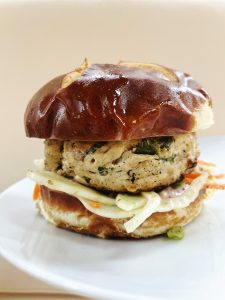 Defrost the burgers completely. On a grill or grill pan, grill the burgers until browned and cooked through, 6 – 8 minutes. Lightly toast pretzel buns while the burgers are grilling. 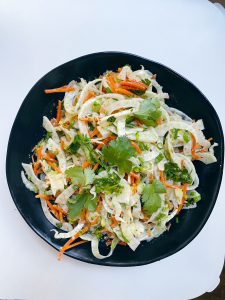 A short drizzle of honey

A handful of cilantro, chopped

Salt and pepper, to taste

Juice and zest of ½ lime

Combine all ingredients in a small bowl and stir until mixed. 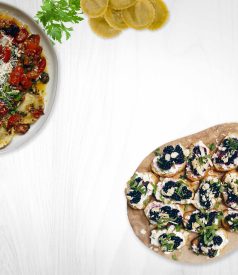 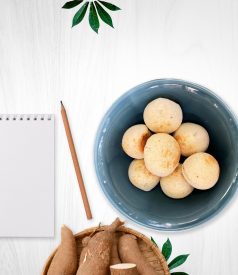 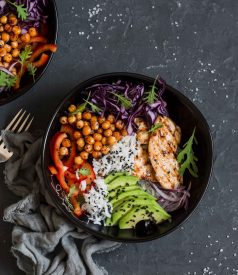