For someone who says he never spent time in the kitchen as a child, Chef Yudi Weinbaum has come a long way.  Chef Yudi worked his way up from prep chef to main chef, opening a successful deli and a thriving private catering business.  The husband and father is also an active member of his local Chabad house, and regularly hosted 20 guests at his home each Shabbos until COVID-19 hit. Chef Yudi wears many hats, but what makes him most unique is his location: Honolulu, Hawaii. It is on the island of Oahu, a beautiful blend of metropolitan bustle and breathtaking scenery, where Yudi churns out everything from fresh challah and potato kugel to ahi tuna and French roast, allowing tourists to enjoy kosher culinary delights along with nature’s feast for the eyes. Just how did he end up in Hawaii? We’ll let Chef Yudi share his story in his own words.

I was raised in London in a Chabad family. Growing up, I never spent time in the kitchen. I wasn’t at all interested in cooking, and I had no idea how to prepare food. I began my career at age 20. I had no degree, and I figured, how hard can the food industry be? Little did I know.

I started working at a company that sold sandwiches and other packaged food to stores during the week and catered heimish-style on the weekends. That job lasted a few months, and then I moved on to Sharrett, a high-end catering company. At this job, I had to prove myself; they only kept you on if you did a good job. The company had contracts with some famous clients. We were hired as the caterer when Ariel Sharon came to visit Tony Blair, and for Israeli ambassador’s Yom Haatzmaut party for 1000 guests. We catered weddings in London’s top hotels. Initially, I was a prep chef. Many of the parties that we catered were plated events; you need a lot of hands- on board to prepare 500 plated dinners! I learned to master an entire appetizer menu of 45 items like finger foods and worked my way up to main courses. In time, I was sent as the main chef to cater high-end cocktail events and small parties.

At the end of 2003, I married a girl from Hawaii. During our first year of marriage one of the places we visited was Florida. During our visit, I was offered a position as manager of a restaurant in Surfside. I had never managed a restaurant, but I did fill a niche in the market as a frum guy with experience and understanding of both high-end and heimish food. It was a very tempting offer.

Originally, I had planned to open my own catering company in London. My parents had a building they used for outreach programming, and there was a catering hall downstairs. It was the perfect setup for me to begin my business.

I realized, however, that the manager position in Surfside was a big jump ahead from where I was and gave me the most potential to grow. I decided to accept the offer.

We moved to Surfside in 2004. At the time, the restaurant I managed was the only high-end establishment of its kind in the area, and it was extremely popular. Within a couple of years, however, the entire restaurant scene changed as Le Marais, Dougies, Prime Grill, and many other East Coast establishments opened branches in Miami. Our restaurant took a big hit, and the owner decided to close the restaurant. To generate income, I began working as a private chef, taking orders for parties and Shabbosos.

When my wife was expecting our second child, we went to Hawaii for Pesach. We had visited earlier in our marriage as well, but each time I went I was amazed by it. What can I say? Hawaii is one of the most incredible places in the world. I’ve been to Africa, Australia, Thailand, and many other countries, but I have never seen true beauty like Hawaii’s.

During our Pesach visit, my mother-in-law pointed out that if we stayed a little longer, she’d be able to help my wife after the birth. At the same time, the Chabad shaliach suggested that I consider setting up a catering business here. He said that there was a lot of opportunity in Hawaii with so many tourists coming to visit.

To test the waters, I placed some ads on the Chabad website offering my services as a private chef in Hawaii, and we decided to stay until the summer so we could make an educated decision.

I was surprised by the response. We were extremely busy with orders that I filled from our kitchen. Our attempt was so successful that we rented a small storefront and named our business Yudi’s Deli. It was a very small place – literally a hole in the wall – but we did well.

It wasn’t all smooth sailing. In the beginning, there was a lot of trial and error.  All chicken and meat are imported from Western Kosher in Los Angeles, which takes a minimum of 10 days from the time we place the order until we get it.  I ordered some par-baked items, such as knishes from the renowned Knish Factory in New York. Sometimes the food got ruined in transit. I was going broke from the shipping. It was not a great system.

The result was that I learned to cook and bake just about everything. Today, all I import are chicken and meat. Every single other item on the menu, from challah to pastries, is homemade from recipes that I created over the years on the job.

Yudi’s Deli caught the attention of Guy Fieri, the host of Food Network’s Diners, Drive-Ins, and Dives.  The reality food series features tiny gems throughout the world, and a visit from Guy Fieri had the potential to make us famous. We were excited when they contacted us, but ultimately, we did not meet all their criteria.  We did, however, continue to grow. In addition to takeout catering, I began offering delivery service in 2006 so people could get packaged fresh meals delivered to their hotels. We started out here in Oahu, but I began getting calls from people staying in Hawaii’s other islands.

It was hard work. I dealt with the deli by day and filled hotel orders at night. I’d go to work on Thursday at 8 A.M. and come home just in time for shkiah on Friday.

In 2009, after the market crashed, I got an offer from someone who offered to take over our lease and pay me enough money to cover the expenses we’d incurred in building out the storefront – plus some. It was enough for me to rent a nice sized kitchen; the caveat was that we had to be out within the month. I did find a kitchen, and quickly set up shop. Now my focus was entirely dedicated to Oahu Kosher, our online orders division.

Life on the Island

Hawaii is literally paradise. The weather is amazing, and the quality of the air here on the island is incredible. It’s a melting pot of cultures, and the people are laid back. In Hawaii we have the most incredible beaches, tropical rainforests, and mountains.  It’s unusual to have such varied topography in one region: usually, it’s one or the other. What I love about Oahu is that we have the city element just a short ride away from natural wonders. My family and I live in Honolulu, the state’s capital. A 10-minute drive gets me to the most magnificent beach, while 45 minutes in the other direction brings me to breathtaking, dense scenery. Being in a metropolitan area means that we have stores that are open past 8 P.M. and one of the largest malls in the world.

Judaism in a remote place is usually tiny, and that’s true of Hawaii, but what makes it different from other places is that you could meet anywhere from 30 to 100 people in shul on Shabbos because we get so many tourists. Many visitors have told me that they’d never come to Hawaii without the kosher culinary experience to go along with the natural beauty.

I am asked often if there is a she’eilah here about the international dateline and Shabbos. No one was more medayek on halachah than the Lubavitcher Rebbe, and it was the Rebbe who personally sent the Chabad shaliach to Hawaii more than 33 years ago. The Rebbe never would have sent someone to a place where there could be a she’eilah about keeping Shabbos. When people ask me about it, I always say that if you have doubt about when it is Shabbos, don’t come. That’s a better alternative than keeping Shabbos for two days, which means that you will miss wearing tefillin for one day. If you hold that there’s a halachic problem, that’s more important than a vacation. We obviously do not hold like that at all.

I’m the gabbai of the Chabad house in Honolulu. Before COVID-19 hit, my wife and I hosted many students and young professionals each Friday night from the University of Honolulu, which is down the block from our home. Many of these people would never dream of walking into a formal shul or Chabad house, but our meals became pretty popular through word of mouth.

When our two older children were young, they attended the small Jewish school here, but that closed when it became too small to sustain. They joined the Chabad shluchims’ online school, and when they each turned 13, they left Hawaii to attend school elsewhere. Our daughter left first and is currently in California. Our son is in Little Rock, Arkansas in an incredible yeshivah run by Chabad shluchim for kids who are learning to integrate into a real school for the first time after being homeschooled. The school is small, but there is a lot of focus on academics.

Although I know they are happy, it was and is hard sending my children away. Hashem is very good to us though. Two days after my son left, my wife gave birth to our third child, a baby girl.

For 13 years Oahu Kosher offered delivery of fresh, hot food twice daily to tourists. My job was the cooking, and my wife did the administrative work.

Then the pandemic hit.

COVID-19 threw us a curveball. Parnassah went from 100 to zero. We had to learn to pivot. I did Zoom classes in the summer on bagel and knish making. I import packaged meat, chicken and Israeli products such as jachnun and malawach. There’s a large Israeli contingent here, some of whom set up stores and kiosks, and I sell these products to them. Many of them never visited a shul or ate kosher before coming to Hawaii, but thanks to Chabad and the warm welcome they extend to anyone who is Jewish, Judaism has become part of their life.

Through it all, I continue to follow my passion in the kitchen. I’m glad to be able to share some of the recipes I’ve created in these pages and hope that one day I might have the opportunity to share some of the food from my kitchen as well, if you are fortunate enough to visit us on the beautiful island of Hawaii. 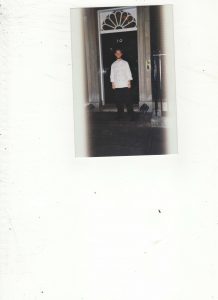 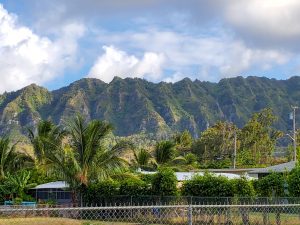 One of Chef Yudi’s daily vistas in Honolulu. 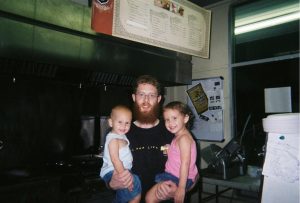 Chef Yudi with his two eldest children in Yudi’s Deli. 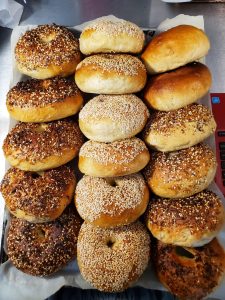 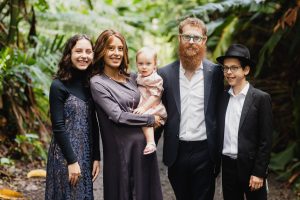 Chef Yudi with his wife and children last summer. 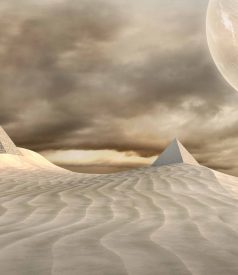 EGYPT: MORE THAN PYRAMIDS AND PHARAOHS 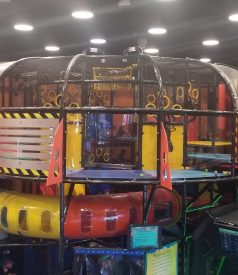 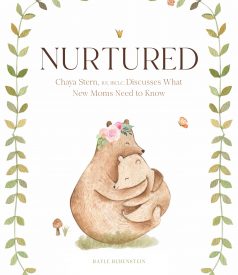