President Trump has long maintained that
CNN is the producer of fake news, but
with so much sensationalism circulating
in our daily media, how is the average
person supposed to differentiate between odd
but true news stories, yellow journalism, and
authentic headlines? Read on and see if you
can spot which of these funny news stories are
actually fake.

Robo Waiter
Can I get some wires with those fries? If you are
sick of poor customer service, maybe the reason
is that you are dealing with the wrong people.
Perhaps you need a machine instead. There is
a café in Hungary that has robots operating as
waiters. The robots are programmed to not only
serve food but also to engage with the clients
by striking up pleasant cconversation, tell jokes
to kids, and even dance. Do you think they
know the moves to the electric slide? Don’t
worry about them spilling your drink as they are
designed to follow fi xed paths when bringing
orders to their customers. According to the café
owner, the online customer reviews have been
positive thus far. But I cannot help but wonder
who has been writing these computerized
reviews. Also, how much do you tip a robot
waiter?

Homework Emergency
In many households, homework time is crisis
time. There is panic, yelling, crying, threats of
violence, and sometimes even property damage.
Well, one boy from Indiana had a homework
emergency and dialed 911 for assistance with
his math assignment. According to the police
department, the boy called the emergency
hotline because he was having “a really bad
day” with “tons of homework.” (We have all
been there, but if anything, I think the police
should be called on the teachers issuing the
homework.) The caller was having diffi culty
with the problem of what is 3×4 + 1×4, and
the operator walked him through the steps to
solve it. The operator, who is now being called
a hero, said she had never received a call like
this in her 13 years of working. 911 maintains
that they are here for only serious, legitimate
emergencies, not school assignments. Do you
think they can help with my son’s Gemara
homework?

Mishloach Manos Mania
The Schwartz family of Midwood have so
much mishloach manos to give out that they
started a GoFundMe page to help cover some
of the costs. Mr. and Mrs. Lipa Schwartz, who
are both teachers, have eight children, bli ayin
hara, and each of them has anywhere from two
to eight teachers, not to mention therapists;
that’s a lot of goodies to give out. When the
Schwartzes made their Purim calculations, their
mishloach manos list reached a record-breaking
2,089 baskets! To accommodate the list, Mrs.
Schwartz told news outlets that she begins her
Purim preparations as soon as Chanukah ends.
What’s on their shopping list? 20 cases of
Kedem bottles, 10 cases of potato chips, and
over a thousand boxes of Mike and Ike’s. “We
buy cases and cases of Kitov snacks,” says
Lipa. To save money, the family bakes their
own cookies. Thanks to social media coverage,
the GoFundMe page has so far generated $118,
not nearly what they will require, so it’s back to
the kitchen they go for more baking.

Hamantaschen Fit for a Giraffe
What is your favorite hamantasch? Prune?
Chocolate? Apricot? How about alfalfa?
Well, that is the hamantasch filling of choice
for giraffes at Ramat Gan Safari in Israel. The
caretakers of the long-necked animals made
a giant hamantasch filled with their favorite
flavors like alfalfa, wild-fi g branches, and
acacia twigs. The zoo makes them work for
their food in order to keep the animals’ nature
skills intact. The giraffes need to carefully
and creatively fi nd ways to get to the various
branches and vegetables using their teeth and
long purple tongues and teeth because the Purim
treat is presented to them through a tough net
instead of the more traditional yeast dough
(apparently giraffes are gluten sensitive).

Koreans Learning Talmud?
If you’re looking for a new chavrusa, try
Korea! It seems the country, populated by 49
million people, are avid readers of the Talmud.
It’s actually a bestseller in South Korea! The
government loves the Talmud so much that
they made learning it mandatory for all Korean
schoolchildren, and every household has at
least one copy of the Aramaic sefer. Koreans
have also adapted to Talmudic learning style
by implementing p eer-reviewed (chavrusa)
learning as well. Koreans believe that the secret
to the Yiddish kop has to be in the Talmud since
so many Jews devote hours of learning it each
day. Should we tell them about cholent too?

Rabbi Rapunzel
A rabbi living in Meah Shearim might soon
shatter a Guinness Book of World Records title
for world’s longest hair by growing his peyos
and beard an astonishing six feet in length. The
current title belongs to a woman from New
Delhi, India whose locks measure a whopping
eight feet and 21 inches. The rabbi, who keeps
his beard out of his way with rollers and pins,
says he is not doing this for fame, but rather for
Kabbalistic reasons. The current title holder is
already disputing the challenge, claiming that to
qualify the hair in question must be scalp, and
not facial hair. If the rabbi wins, he intends to
donate all profi ts to charity.
Answers:
Real 2) Real 3) Fake 4) Real 5) Real 6) Fake 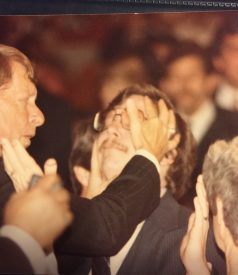 A MINISTER’S JOURNEY TO JUDAISM 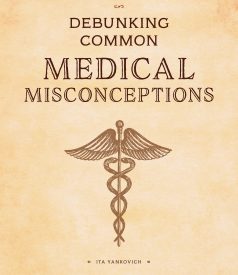 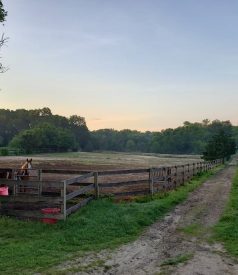