The recent passing of Mr. Charles Saka, z”l, one of the patriarchs of the Syrian Sephardic community in the New York left a bereft community. Mr. Saka did much to make the Sephardic community in the Jersey Shore a vibrant religious center as both a man of great vision and a generous philanthropist. Among his achievements was helping to establish the Magen David Synagogue complex in West Deal, NJ. He also helped sustain and expand Hillel Yeshiva and the Deal Sephardic Network Center to provide wholesome activities for the community’s youth. One of his proudest projects was donating funds for the English translation of the Yalkut Yosef, a halachic work written by Rabbi Yitzhak Yosef, the current Sephardic Chief Rabbi of Israel based on the rulings of his father, Hacham Ovadia Yosef, zt”l.

While many members of our community were away in the Catskills, dozens of heroic men and women in our community gave up their time on Wednesday night, July 20 to participate in a lifesaving JCCMP blood drive  that was hosted at   Agudas Yisroel Bais Binyomin in memory of Arnold Jablon, a”h, the father of Douglas Jablon, special assistant to the President of the Maimonides Medical Center. A delicious dinner was served to all of the donors. They also received a free gift to remember a most special night.

JCCMP Back to School Backpack Giveaway 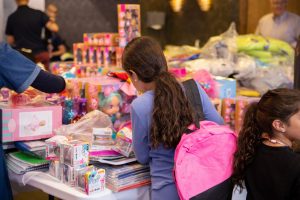 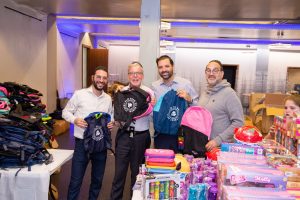 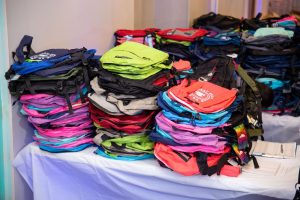 Over 1000 people from Marine Park and surrounding neighborhoods chose to spend Labor Day with the JCCMP on September 5 by attending the JCCMP’s annual Back to School Backpack Giveaway. Attendees were given the opportunity to choose backpacks of various colors with necessary school supplies in them. In addition, each attendee was able to pick two toys from a table overflowing with cool and nifty gadgets for kids of all ages. As an extra bonus, all who attended were treated to cotton candy and popcorn. Shea Rubenstein, executive director of the JCCMP, was on hand making sure all who registered got the supplies they needed. A special thank you to Menucha Worcman, JCCMP’s director of social services, for all her help in facilitating the event and for bringing in her kids to help volunteer.

The annual Shuvu parlor meeting was held this summer at the home of Gedaliah and Rachael Weinberger. World-renowned Dayan Aharon Dovid Dunner came from London to update members of the community about the Ukrainian aliyah that came about after thousands of our Jewish brethren fled their home after the Russian invasion. Hundreds of young boys and girls and in towns throughout Israel received a new spiritual lease on life by enrolling in Shuvu schools, the inspiration of Rav Rav Avrohom Pam, zt”l, who wanted to create an educational network for Jewish children coming from the Former Soviet Union. Dayan Dunner regaled all those who came to the parlor meeting with incredible stories of hashgachah pratis regarding these children and their dedicated teachers.

A Brooklyn summer highlight is the friendly annual softball game between   Hatzalah volunteers and members of the NYPD. This year, the game was played in memory of retired NYPD Chief Charles “Chuck” Scholl, whose death in June saddened the Jewish community. During his 41-year career in the NYPD, Scholl worked intimately with Shmira, Shomrim, Hatzalah, Chaverim, Misaskim and Chesed Shel Emes. This year, the game was won by Hatzalah 10-9 in 12 innings. 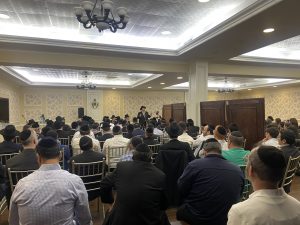 An inspiring Kinus Hisorirus was orchestrated by the community and all the Marine Park shuls on Sunday night, September 11, 21 years after the world was shaken to its core by the attack on the World Trade Center and the Pentagon. The Marine Park Kinas Hisorirus offered us chizuk by unforgettable speeches by Rabbi Yaakov Bender, Rosh Yeshivah of Darchai Torah; and Rabbi Ephraim Shapiro, Rav of Congreation Shaaray Tefilah in North Miami Beach. The kinus took place at Yeshiva Ohr Yisroel in the zechus of those in the community who are in need of a refuah.

WORDS ON THE STREET 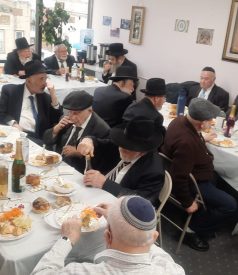