The Jewish Community Council (JCC) of Marine Park is sponsoring the 6th Annual E-Commerce Expo and Conference that will be held at The Palace on Tuesday, February 12th. This premiere annual e-commerce event of the New York Jewish community is expected to attract more than 800 attendees from across the Tri-State region. Established Amazon sellers and E-tailers with a combined buying power of $5BN will meet exhibitors and attend seminars to learn about the many resources and services available. There will be four separate tracks offered at the seminars portion of the event. These are: E-Tail, Amazon Level 1, Amazon Level 2, and Business Development. The program will include top speakers, breakout sessions, CEO round table, full buffet dinner and valet parking. The industry trade show will include over 60 vendors, and great networking. For more information or to register as a vendor, please email Shea@jccmp.org or Rivka@TheJewishEcho.com or call 718-407-1832.

Rabbi Uri Zohar, the world’s most famous baal teshuvah, was Israel’s most popular comedian, movie star/director and television personality in the 1970s. A few years later, he became frum and eventually a rabbi, and today is a major kiruv personality. He will be one of the featured speakers at the annual Flatbush Community Breakfast for P’eylim Lev L’Achim, the movement of the Gedolei Yisroel at the Agudas Yisroel Bais Binyomin on Sunday, January 13th.

The head of the Slobodka Yeshiva in Bnei Brak, Rabbi Moshe Hillel Hirsch, came to spend Shabbos in Flatbush on Parashas Vayechi. Hundreds of community members took advantage of the opportunity to participate in a melaveh malkah and community reception in the home of Reb Menachem Braunstein to benefit the world renowned yeshivah. For that Shabbos, Rabbi Hirsch davened at Kol Torah Bais Medrash, Kahal Zichron Yaakov and Shlomo, and the Imrei Zvi Bais Hamedrash.

The Jewish Community Council (JCC) of Marine Park is offering small business entrepreneurs the valuable opportunity of benefitting from monthly webinar series to help them grow their business. This month’s topic, “Grow Your Business with the Right Instagram Strategy,” will be delivered on Tuesday, January 15th, 11 A.M. – 12 P.M. The seminar will be presented by David Koningsberg who will instruct all participants on how to use this popular social medium to increase their company’s sales by using simple strategies.  The cost is just $10 and entrepreneurs can participate from home.

Chanukah is a time when families get together to celebrate at parties. This can also be a challenging time for those that come from divorced homes, which is why My Extended Family, a Flatbush organization, has over the past few years hosted a most enjoyable Chanukah party giving single parents and their children much happiness and joy. This year’s party took place on the second night of Chanukah at the Jewish Children’s Museum on Eastern Parkway and was as usual, an amazing success.  The event was sponsored by the Zakheim, Klerer and Weiss families and music was provided by Shea Rubenstein. My Extended Family also recently sponsored a community event at the Kingsway Jewish Center on the topic of “Singled Out: How We ALL Can Help Raise Our Children from Single-Parent Homes.” The speakers were Rabbi David Ashear and Dr. Mark Banschick, MD. A question and answer panel included Dr. Banschick, Rabbi Yoseph Vigler, Rebbetzin Tzippy Vigler, Rabbi Doniel Drandoff and Mrs. Chana Blonder.

The annual Rivkah Laufer Bikur Cholim Luncheon was held last month at Ateres Golda to honor supporters of this dedicated organization which helps patients and their families while they are dealing with an illness at Brooklyn hospitals. The Miriam Lubling memorial award was presented to Mrs. Hudi Silber in memory of her husband, Rav Elchonon Silber. The rofeh award was presented to Dr. Israel J. Jacobowitz, director of the minimally invasive cardiac surgery at Maimonides Medical Center. The keser shem tov award was presented to Mrs. Brachie Spira, Rebbetzin of Bais Horoa of Flatbush in memory of her father R’ Moshe Binik. Chessed awardees were Beilu Blier, Shlima Levenshteyn and Norma Lowenbraun. The luncheon was dedicated in memory of Mrs. Ibolya Schwartz.

Brooklyn Jewry – both Sephardic and Ashkenazi – mourn the petirah of Chacham Shaul Kassin, zt”l, Chief Rabbi of the Brooklyn and the metropolitan area’s Syrian community, who passed away on Shabbos Parashas Vayeshev. He succeeded his father Chacham Yaakov Kassin, zt”l in 1994, as the first Chief Rabbi of the Syrian kehillah. Born in 1920 in Yerushalayim, he and his family moved to Brooklyn in 1933 when his father was asked to lead the Sephardic community. For many decades, Chacham Shaul taught at Yeshiva Magen David in Flatbush. Always missing the kedushah of his native Eretz Yisroel, he visited it many times. A grandchild of the Chacham explained that he wasn’t able to live permanently in the Holy Land because of his commitment to the Brooklyn Syrian  community in addition to not wanting to leave his large family, which included great grandchildren living in New York. May his memory continue to be a blessing.

One of the projects of the Flatbush Community Fund is a tutoring program that helps keep students in our community from becoming at-risk youth. The FCF’s onsite tutors are mentors that give struggling students the confidence to believe in themselves and make the right decisions both academically and in life.

Rabbi Maimon Elbaz of Flatbush, world renowned Torah educator whose programs have been seen by Jewish communities throughout the English-speaking world and director of Torah Shows, recently premiered a new and outstanding audio-visual presentation at the recent Flatbush Hakhel Thanksgiving Day Yarchei Kallah at Rabbi Reisman’s shul (Agudath Israel of Madison). The topic of the presentation was  “The Thirteen Principles of Faith Required of Every Jew.” 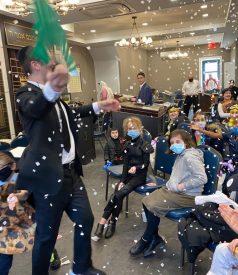 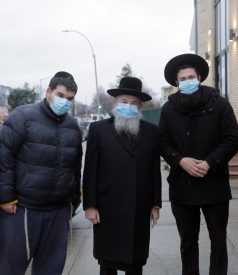