On Thursday night, October 21, hundreds of women and girls made their way to Kingsway Jewish Center for the JCC of Marine Park’s Fourth Annual Mother-Daughter Challah Bake. This year, the JCCMP partnered with BJX, Brooklyn Jewish Xperience, to kick off the Flatbush Shabbos Project, Shabbos Parashas Vayeira. The ballroom was festooned in vibrant pink, white, and black, and each attendee received an apron, gift bag, and rolling mat in addition to the challah dough for the hafrasha. The evening began with inspiring words from Rabbi Yitzchak Fingerer, Rav of BJX. Yaffa Palti, a well-known teacher and lecturer who flew in for the occasion from Miami, demonstrated the dough-making process in an entertaining video. She addressed the crowd with stories and insight about the mitzvah of challah and led them through the hafrasha as the brachah reverberated through the room. Chavi Klein, a young and up-and-coming singer from the Flatbush area, sang a rendition of Baruch Levine’s “Vizakeini”, and

Maayan Davis led the crowd in exuberant dancing to celebrate the evening. The evening culminated with a braiding demonstration by Yaffa Palti, and each attendee returned home with ready-to-bake challos to enhance the upcoming Shabbos. The JCCMP would like to thank BJX and the sponsors of the evening – Glatt Mart, Junees, and the Jewish Center for Performing Arts (JCPA) – as well as the many volunteers who made the event possible. 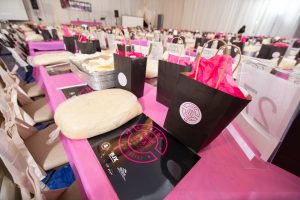 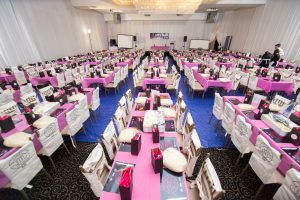 An incredible addition has been added to our community. MYRCB (Chaim Berlin) has launched a nightly kollel at their new, spacious building located at 3502 Quentin Rd. It is truly inspiring to see so many individuals, after a long day of work, set out the time to dissect a sugya with their chavrusos. Under the leadership of the Rav, Rabbi Yehoshua Rapps, and the Rosh Kollel, R’ Naftali Kurstein, the kollel gathers Sunday to Thursday from 8:45 – 9:45 P.M. followed by Maariv. All are welcome to join us as we begin Maseches Sota! For more information, please contact Yosef Segal at 646 -641-5011. 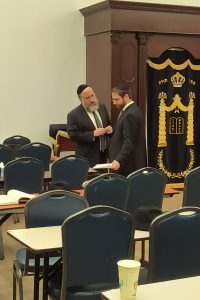 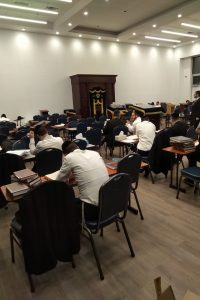 On Sunday, October 10, the JCCMP hosted a blood drive at The Bridge Multicultural Project to combat the blood shortage caused by COVID-19. Over 75 donors showed up despite the rainy weather. The blood drive was held in memory of Arnold Jablon, father of Douglas Jablon, assistant to the president of Maimonides  Medical Center. Breakfast and lunch were served, and a Starbucks gift card was distributed to each donor. Thank you to Maimonides Medical Center and to Mark Appel from the Multicultural Project  for making the event possible. 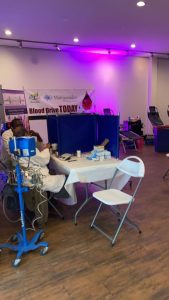 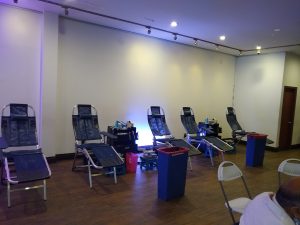 Four generations of Flatbush students and parents mourn the petirah of Rabbi David Eliach z”l, longtime leader of Yeshivah of Flatbush in Brooklyn. He was 99.

Rabbi Eliach, who lived in Midtown Manhattan, oversaw the education of thousands of children at the school between 1953, when he moved from Eretz Yisrael to teach there, until his retirement as dean in 1997 at age 75. He remained closely involved with the school for the rest of his life, visiting multiple times a week to mentor teachers. Rabbi Eliach was born into a prominent Karliner family in Yerushalayim in 1922 and grew up in the Old Yishuv, living in Botei Varsha, near Rechov Meah Shearim. He went to the Chassidishe Cheder Chayei Olam, then Etz Chaim, and later, from 1939 to 1943, learned at the Chevron Yeshiva, where the Rosh Yeshivah, Rav Chaskel Sarna, took a liking to him. He merited meeting the Chazon Ish in the 1930s. He also learned b’chavrusah with Rav Michel Yehuda Lefkowitz for over two years. He met his wife Yaffa, a Lithuanian World War II survivor, who later became a pioneering Holocaust historian. Mrs. Eliach passed away in 2016. The Eliachs moved to the United States after Rabbi Eliach was called on to join Yeshivah of Flatbush, becoming the yeshivah’s high school principal in the 1960s and later its dean.

BJX coordinated the Flatbush Shabbos Project on October 22 – 23, Parashas Vayeira, at Agudath Israel Bais Binyomin. The special Shabbos program featured popular Jewish singer Yehuda Green and a host of internationally renowned guest speakers such as Rabbi Paysach Krohn, Rabbi Moshe Tuvia Lieff, and Rabbis Moshe and Yitzchok Fingerer of the BJX. The Flatbush Shabbos Project is part of a global initiative that is celebrated in more than 2,000 Jewish communities. The concept first started in South Africa under the guidance of that nation’s Chief Rabbi Warren Goldstein.

For men who are interested in avodas Hashem and mussar, there is a monthly program running,  under the guidance of Rabbi Leib Kelemen, which will focus on refinement of character. Rabbi Kelemen is the founder of the Center for Kehillah Development, a leadership development project devoted to the growth and wellbeing of Jewish communities worldwide. He has also established the International Organization of Mussar Vaadim,  a network of self-development organizations that focuses on Torah study, observance of Jewish law, and importance of character development. For more information on the new monthly vaad email yweissman@iomv.org.

The theme of this year’s annual dinner for the Mir Yeshiva in Flatbush is “Ein emes elah Torah – There is no truth but the Torah.” One of the highlights will be a special tribute to Mrs. Harriet Mehlman, a”h, for helping build generations of Torah, together with her late husband, Mr. Solomon Mehlman, z”l. Two of their four sons, Mr. Mordy Mehlman and Mr. Josh Melhman, are serving as the dinner chairmen. The dinner will also pay tribute to Rabbi and Mrs. Yekusiel Bittman (Harbotzas Torah award), Mr. Avi Schick (Hakoras Hatov award), and the ten members of the yeshivah’s Choshen Mishpat Kollel. The dinner will be held on Sunday, November 14 at The Palace.

Thousands of former talmidim mourn the petirah of Rav Moshe Dovid Tendler, zt”l, who for decades was a maggid shiur in Yeshivas Rav Yitzchok Elchonon at Yeshiva University, a professor of biology, and chairman of the YU biology department. He was also the longtime mora d’asra of the Community Synagogue in Monsey. Rabbi Tendler was the highly respected son-in-law of the posek hador, Rav Moshe Feinstein, zt”l. Rabbi Tendler was one of the most esteemed experts in dealing with questions on medical ethics and halachah.

Pirchei program in the Mir Yeshiva in Flatbush occupied until they could bring their sons home. A then young and unknown kollel student in Mesivta Torah Vodaath by the name of Rabbi Yisroel Reisman agreed to give a shiur to the fathers on one of the books of Tanach, which in recent times has not been studied much in the yeshivos. The fathers were captivated  by the dynamic lessons and soon other men whose sons were either too young or too old for the Pirchei group began attending as well. Eventually, a larger place was needed to accommodate the group in Flatbush. Today the Motzoei Shabbos Navi shiur, which runs from after Simchas Torah until just before Shavuos, is held in the spacious shul of Ahi Ezer Congregation. It also attracts many women and is broadcasted live via satellite communication to more than a score of locations throughout the world, including Israel, parts of Europe, and Australia. This year Rabbi Reisman begins offering insights on Sefer Ezra.

Supporters will attend the 52nd annual gala of OHEL Children’s Home and Family Services on Sunday, November 21, at the New York Marriott Marquis. For more than half a century, the mission statement of OHEL has always been to help the Jewish community by serving as a trusted haven of safety and support, providing services that help build lives, strengthen families, homes and communities who face social developments and emotional challenges. The guests of honor will be Mr. and Mrs. Mark and Shavy Schlossberg and Liberty One Group.  A special tribute will recall the legacies of Miriam Weiss, a”h, and the Mrs. Rose Pollak, a”h. The Young Leadership Award will be presented to Mr. and Mrs. Asher and Tziporah Pollak.