Pesach is a holiday that demands a lot of food to accommodate all the necessary meals. Unfortunately, there are so many in our community who due to their limited finances cannot share in the celebratory mood of the chag as they struggle to find means to purchase even the most basic Pesach provisions. And this year, due to COVID-19, an unprecedented amount of families found themselves in such a state.

The JCC of Marine Park held two emergency food pantries to help those in need. Their annual Pesach Distribution took place on March 22 at the Met Council Warehouse. Masked and gloved volunteers packed and delivered Pesach provisions to 220 families. Each family received five boxes of food, including a case of grape juice, fruits, vegetables, and dry goods. Due to a surge in demand and the countless number of calls for additional assistance, the JCC decided to make another pop-up pantry the following week. On March 27, six pallets of food were delivered to The Bridge Multicultural Project at 1894 Flatbush Avenue, converting the center into a food pantry. From the following Sunday through Thursday, the pantry was open to those in need and deliveries were made to those unable to leave their homes. The JCC was proud to assist so many in these trying times. A huge thank you to Met Council, and in particular Ben Zaintz and Jessica Chait, for their countless hours of work ensuring that the pantries were as successful as they were.

This year Pesach ended on Thursday night, leaving  just one day to prepare for Shabbos Parashas Shemeini. With the coronavirus crisis continuing after Yom Tov, many communities were justifiably concerned that besides for the rush, the need to purchase chametz essentials would create an untenable situation in the local groceries. In order to alleviate crowding, Chasdei Lev organized a one time “Chametz Box,” which allowed members of the community to purchase essentials at a predetermined price and make a quick drive-by pickup with complete social distancing. After ordering online, with the choice of buying an assortment of products, a box of freshly baked challos, or a combination package, the buyers simply drove up to the street in front of Yeshiva Ohr Yitzchok with their name and number displayed in the window, and the volunteers, all decked out in their masks and gloves, deposited the items ordered into the truck of the car.

With relatively few crimes taking place locally during the current pandemic, Flatbush Shomrim Safety Patrol has temporarily steered its community service efforts in a different direction, providing equipment and services to allow less seriously ill COVID-19 patients to weather the virus at home. It was not lost on Shomrim members that their workload was considerably lighter than usual during the coronavirus outbreak while Hatzolah was being slammed with calls and hospitals were overburdened with patients. Trying to find a way to serve the community, Shomrim conferred with the medical community and realized that most people experiencing coronavirus-related breathing difficulties could avoid hospitalizations if they were properly oxygenated. Hitting the phones, Shomrim was able to get approximately a dozen oxygen concentrators donated, but it was clear that significantly more were needed in order to combat the skyrocketing infection rates. More than 250 additional oxygen concentrators were purchased from various sources, the Jewish community at large responding enthusiastically to a Chesed Fund campaign to finance the machines, each of which comes with a not-insignificant $800 price tag. Protocols were put in place to ensure that the equipment would be used properly and serve its intended purpose. Oxygen concentrators, as well as pulse oximeters to monitor heart rates, were loaned only to those with a prescription, while a group of doctors, physician assistants, and nurses were recruited to stay in touch with participants on a daily basis. Frequent home visits were made to monitor patients’ progress, with reports given to their primary care doctors to ensure continuity of care. Tzvi Weill, Shomrim coordinator estimated that more than 500 home visits were made by the group’s medical team over Pesach, and that approximately 30 patients were able to return home on Yom Tov because they had oxygen concentrators in place. (Source: Sandy Eller – Yeshiva World News)

With the horrific pandemic that has taken the life of more than 10,000 people in New York City alone, there was a back log of bodies that quickly overwhelmed hospital morgues and funeral homes. This situation further complicates the Jewish community who abide by the halachah that mandates speedy burial of the deceased. Several religious organizations, including Chesed Shel Emes, Misaskim, and Jewish and Muslim funeral directors, appealed to Councilman Chaim Deutsch, who set up a conference call with the city’s health department and medical examiner. The city officials relayed the religious organizations’ concerns to the state health department thereby compelling the state to issue new guidelines expediating the release of bodies. “The Department of Health has been actively engaged with us, working overtime to ensure dignity for the deceased and the impacted family,”said Councilman Deutsch. “This is a deeply painful time for New York and the rest of the world, and may G-d bring  a swift end to this epidemic.”

The JCC of Marine Park,  together with Senator Andrew Gounardes and community leader Steven Patzer, distributed toys to homes in Bensonhurst and Bay Ridge to put a smile on children’s faces during these difficult times. 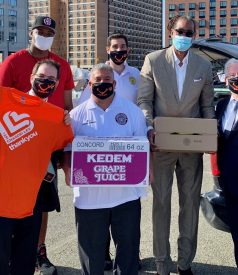 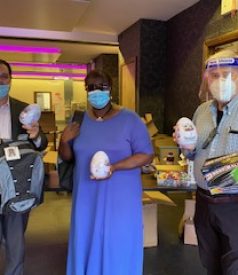