For families who are struggling to make ends meet under normal circumstances, Pesach is an even more trying time. The JCC of Marine Park’s Pesach program alleviates the financial burden in numerous ways. This year, hundreds of JCCMP volunteers will help pack 700 cases of food consisting of grape juice, matzah, fresh produce, and other basic Pesach staples. These will be delivered to over 150 families who would otherwise not have food for Yom Tov. The JCC of Marine Park also provides families with vouchers to local supermarkets so they can obtain fresh poultry for the chag. Gift cards are also distributed with which families can purchase eggs, cottage cheese, milk, and other perishables.

In a dramatic step, New York State’s education department is abandoning its efforts to impose punishing regulations on yeshivos and private schools, citing what they called an “unprecedented” number of comments against the proposal.

The Board of Regents, at their monthly meeting, summarized the 140,000 comments submitted by citizens from across the state over the summer, with most of them asserting that the proposed regulations would infringe on their rights as parents to choose their children’s education. Shannon Tahoe, the education commissioner, acknowledged that the vast majority of yeshivos were providing the constitutionally mandated education that is “substantially equivalent” to public schools. She said that the agency will now sit down and talk to “stakeholders” in the private schools to formulate a system that works for everybody.

The Brooklyn community marked the fourth yahrtzeit of the beloved Rosh Yeshivah of Yeshiva and Mesivta Torah Vodaath, Horav Chaim Yisroel Belsky, zt”l. Rav Belsky inspired generations of talmidim and affected the Jewish world at large with his expertise as a posek and one of the foremost experts in kashrus shailas. Speaking at the yahrtzeit gathering in Torah Vodaath was the Rosh Yeshivah’s son-in-law Rav Dovid Goldstein, a R”M in the mesivta and Rav Eliezer Ginsburg, the Rosh Kollel of the Mirrer Yeshiva in Flatbush.

World renowned marbitz Torah Rabbi Y.Y. Jacobson was the special guest speaker at last month’s annual melaveh malkah for Yeshiva Darchei Aliya. The yeshivah is a unique elementary school yeshivah whose aim is to nurture each child’s abilities and promote a love for Torah and Yiddishkeit along with the ability to become an independent lifelong learner. Moving from the traditional one-size-fits-all approach, Yeshiva Darchei Aliya strives to provide a custom education for each child according to his personal needs.

Yeshiva Tiferes Yisroel, the Brooklyn branch of the Chofetz Chaim network under the guidance of Rabbi Zvi Turk and Rabbi Yehuda Jacobson, will be celebrating its 32nd annual dinner at The Palace on March 3. The goal of the yeshivah has been to inculcate in the talmidim a love for Torah embedded in middos tovos and also supply more “manpower” to the world of chinuch across America and beyond. This year’s guests of honor will be Mr. and Mrs. Yumie Gross. Other honorees will include Mr. and Mrs. Shea Rubenstein, Mr. and Mrs. Yossi Amsel,  Dr. and Mrs. Baruch Wieder, and Mr. and Mrs. Yonatan May. Mr. Shaul Wasser and Mr. Mordechai Serle are serving as the dinner and journal chairman.

The 36th Annual Flatbush Tea for Yeshiva Livnas Hasapir – Chush is dedicated to giving a quality education to special needs students. Last month the organization offered women a chance to enjoy a hilarious comedy entitled “Inspection…Rejection” by MK and Friends. The event also paid tribute to Ms. Aviva Rubinstein as therapist of the year and Ms. Chany Mayer as the chessed awardee.

Councilman Chaim Deutsch Introduces Legislation for a Moment of Silence

Brooklyn City Councilman Chaim Deutsch has recently introduced a resolution into the New York City Council to establish a moment of silence in all public schools at the beginning of each school day. For this to pass,  it must first go through the New York State Legislature, and then be signed into legislation by the Governor. “Data has shown that the moment of silence provides a unique outlet for children and adults. It’s a time to focus inward, to relax and momentarily get away from troubles and stress,” says Deutsch. The resolution has generated support from both Rabbi Shmuel Butman, director of the Lubavitch Youth, and David Mandel, CEO of OHEL Children’s Home and Family Services.

The Mir Yeshiva in Yerushalayim will holds its annual American dinner commemorating the landmark yeshivah’s 203rd anniversary since its establishment in Mir, Poland. The dinner will be held at the BellWorks in Holmdel, NJ and the theme of the event will be “Celebrating Our Portion – Ki Heim Chayeinu.” The guests of honor will be Mr. and Mrs. Alexander Scharf. Other honorees will be Mr. and Mrs. Shmuel Zimmerman, Rabbi and Mrs. Uri Stern, Mr. and Mrs. Nochum Munk, and Mr. and Mrs. Aryeh Weiss. The Harav Nosson Tzvi Finkel memorial award in memory to R’ Beinish Mandel to be accepted by the Mandel family.

A pre-Purim singles event was hosted on February 23 by the JCC of Marine Park and Baila Sebrow Events. It took place in The Bridge Multicultural Project. Over 200 singles enjoyed an evening of music, gourmet food, games, and raffles.

At the JCCMP computer classes hosted by Ohel. 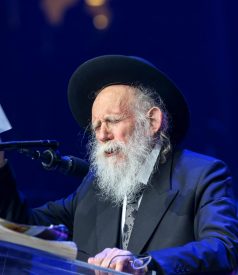